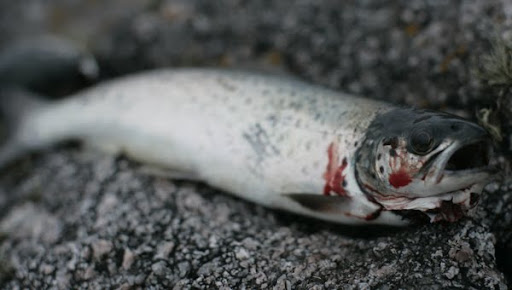 I went back to perch rock this evening with some new homemade tools, a jointed spoon and cork float rig. I made the new jointed spoon out of a couple of teaspoon handles and some split rings. Rather than engrave scale patterns with a hacksaw as previous, I opted to cover it with some self-adhesive foil and gave it some colour with nail varnish. The eyes were drilled out and foil eyes placed inside the recess with a coat of nail varnish. I added a smaller treble towards the eye end hoping to reduce missed bites. It swims with a lazy side to side motion and casts a little better than my original teaspoon pirk. The only draw-back is it occasionally tangles in flight leaving me to wind in a hoop of metal as the back treble catches the front.

The float I cobble together from a piece of hollowed out garden cane and two wine corks which I drilled with a hole slightly smaller than the diameter of the cane and then forced the corks over the cane. I quickly sanded the corks until the seams met uniformly and then shaped the ends. Paint wise I found a can of canary yellow acrylic spray in the tools shed, I had used this last year to spray the handbrake lever on the island’s tractor to remind people not to leave it on when they were driving. A bit more self- adhesive foil and red nail varnish and the float was finished.

I have never really floated fished in the sea and fancied something different, the idea was to chuck the float rig out on one rod and use the other for spinning while I waited. The first cast with the hook baited with mackerel strips had just managed to settle when the float shot off. A mackerel eventually surfaced, skimming it ran straight up onto the ledge at my feet . Unhooked and re-baited the second cast landed the float bang on target and it too quickly shot beneath the waves as another mackerel took the bait. My spinning rod was waiting; I cast the float again and it bobbed long enough for me to pick up the other rod.
With a tail wind the heavier lure effortlessly pulled the line off the reel. I let the lure sink to the bottom and lazily wound in, all the time watching the float on the other rig. Ten minutes later and a flash of silver close into the rocks pulled the rod tip down and I was in. A small sea trout bolted for cover and then suddenly just lolled against the line. At the surface I could see the forward treble hook had almost ripped out one side of of the trout’s gills, but it had fallen to my new lure. I finished the trout off by breaking its neck but most of the blood had already trickled away. The trout like one I had watched the previous evening looked to have come up from the beneath where the submerged part of the ledge drops off and I wondered whether there may be and overhang giving the trout a holding space out of view from the surface.

The float picked up a couple of small pollock but the light began to fall and seal came round the corner so I set off home and sea trout for supper. 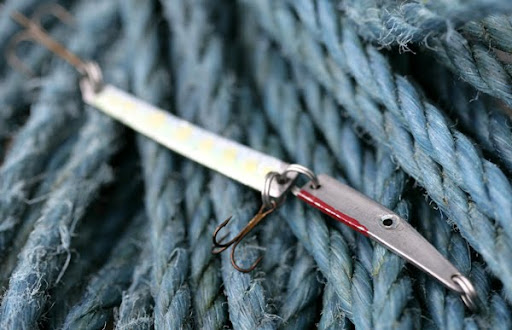 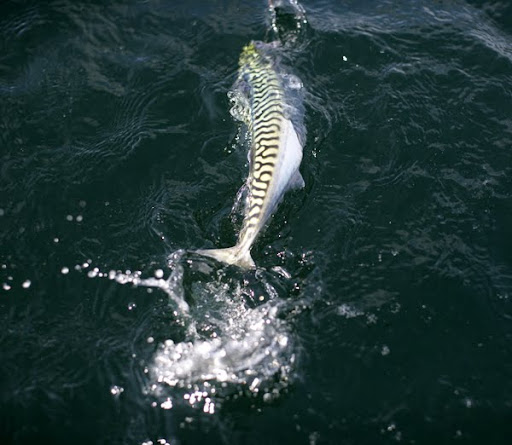 It wasn`t much fun at my favourite rock perch (see previous post) this afternoon, with a headwind somewhere between 5 and 6; but never the less I was fishing. Despite the wind I still managed to cast some distance but there was little room for error as the wind took any drifting line. I landed another fair sized mackerel and felt a couple of other random tugs on the line. My short session was ended by a phone call telling me dinner was ready and it was my turn to do the dishes, ah if only people phoned when I was doing dishes to tell me it was my turn to go fishing. Once again my teaspoon pirk brought home the goods and now I feel it is a bit too precious to risk losing so I must return to the workshop to make some more and maybe try out some new ideas.

Sea Trout at the top of the tide.

I snuck off for an hour before dinner taking a sort cut through the woods to the Northwest corner of the island. Here a large slab of granite cut a little by the sea makes a perfect platform for spinning. The water is not deep and the seabed sandy but a long outer reef provides some interest and marks out the edge of a natural channel between itself and the shore. This is a point of passage for fish coming in from the Sound of Iona to feed in the shallow bay that separates the island from Mull. Having arrived at the top of a spring tide my chances were a little better than average although with a driving headwind my casts would probably come up a little short. I was fishing almost for free having found the rod in one of the islands outbuildings and using a reel left behind by a guest with my homemade, teaspoon pirk for a weapon. At six foot the rod is a little shorter than I am used to but it does have quite a whip action and despite the wind my lure managed to punch its way out into the channel. I let the lure flutter to the bottom before retrieving it with spasmodic jerks, and then speeding up to keep it over the weeds as it neared my perch. Twelve casts in and I foul hooked one of the greater sand eels that had taken to schooling up with my lure. Two or three casts later the small rod bent double and large arc of silver flashed in the blue. The mackerel bolted cutting the surface as if equally comfortable in both mediums. Being used to stiff boat rods and heavier line, I wound in taking no account for my lighter gear, when I lifted the fish up onto the rocks I realised just how flexible the rod really was as the tip hung limply pointing at the fish.

Ten minutes later and I felt another tug and then nothing, as my lure neared a shape glided past its speed and poise had the feel of sea trout but I wasn`t completely convinced. I casted again, letting the lure sink and then while trying to remember the action of last retrieve wound in. The line went taught, there was no flash just a solid shadow that set its own course despite the rod and line. So I landed my first ever sea trout and maybe held a bit too long before returning it to the sea.

Image Above Right: The Northwest corner of the island
Image below: Mackerel 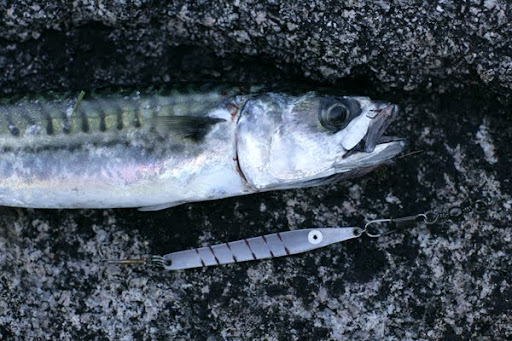