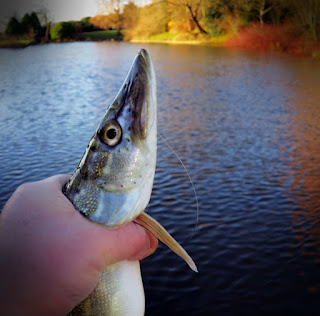 Image: A little fellow caught on a Jig Head.

God it is cold.  I am bandaged into my clothes with various bits of fishing tackle slipped in between the layers of cloth and still the bits that remain exposed ache in the cutting wind.  I have taken one small pike at the other end of the lake with a resin jig head but the centre section of water has been covered by the lines of a small group of carp anglers.  A couple of weeks ago I woke one of their brethren who had been camped out overnight by snagging one of his lines and setting off his bait alarm. His face said it all, woken from dreams of sumo sized carp only to find a sumo sized pike angler looking a little more than embarrassed.

I have learnt my lesson and I am fishing out of harm’s way in amongst the snags at the shallow end of the lake. So far it has been one fish and two lost resin jig heads.  I clip on the long cast balsa minnow and watch it sail through the cross wind; it runs a little shallow for cold winter days and I still nervous of losing it having neglected making a few spares.

There is a call from across the lake and I briefly wonder whether I have hitched up another line. One of the carp lads is asking if I have a spare fishing lure. I tell him to come over and start routing through my bag and its collection of old prototypes and reject lures. I pull out an early version of the pine wobbler that has a slightly shorter lip. Its centre hook is missing; probably taken to use on another lure. I replace the hook and tell him I’ll just test it as I can’t remember if it’s any good despite the fact it still has some pike teeth ebbed in it. It swims with a wide wobble but it I am still not sure about it, so I give him a later version which has also seen a few battles and he thanks me and wanders back. He has fished here long enough to know I make the lures myself.

I keep the pine lure on the line and give it a few casts but it is difficult to handle after the precision of the weight shifting balsa lure.  A badly aimed shot lands it amongst the reed stems at the water’s edge but it swims free and a pike grabs it within an arm’s length. It is only small thing but the fight draws the carp angler back over. I unhook the pike in my hands and with a bit of fumble it leaps back into the water. 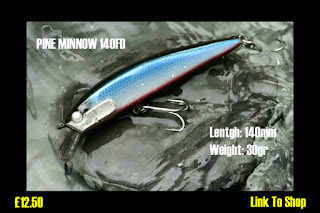 I unclip the lure and hand it over to the carp angler before packing up. It might not be the prettiest thing I have ever made but then there are lots of shiny new lures hanging in shops and none of them have ever caught a fish. The tally stands after two hours at two pike, two jig heads lost and two minnows with a new home which all leaves me a little more space in the tackle bag.
Posted by Paul Adams at 08:02 2 comments: