Another 9am, Another Monday morning 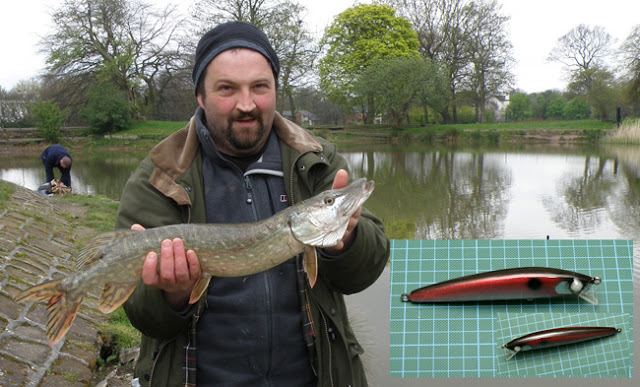 I was a little late to the lake this morning. The workmen who had begun exploring whether the hole in lake was fixable on my last visit were already on site with a pump churning up the water. I asked how they were getting on and a guy in waders told me that the hole was a little larger than they had first thought and it would probably call for an excavator to continue. As to whether they could fix it that may depend on when the money runs out.

I moved a little further down the bank and set up my spinning rod with a new prototype lure I had come to test.  As yet I hadn’t given it a paint job; I was looking to see how it swam and what it was like to cast before investing in finishes. It did what it was supposed to do, but it lacked that certain something so I unhitched it from the trace and clipped on my devil minnow.  Half a dozen casts later and I was into a pike that felt a little larger than the jacks I had caught here previously, maybe it was the ten pounder I had let slip out of the landing net a week or so earlier.

It rumbled to the surface and gave a few kicks before I had it to the bank, a fellow angler had is landing net at the ready to help out and came in without much of a struggle. Unhooking was a bit of an operation even with a pair of long nosed pliers and forceps as the hooks had embroiled its jaw in the net and it took a moment to figure out which was the best way to free it.  A little audience had gathered, dog walkers and workmen so I finally got a picture of me holding a fish. Despite forgetting the old trick of pushing the fish towards the lens to make it look bigger the consensus formed that it was about six pounds (fishermen’s estimate) not a monster but nice to start to a day’s work with. After a bit of a tail pulling in the shallows it recovered and sped off into the murk.

A little stunned by my early success I ambled around the rest of lake for an hour before heading home with big plans to turn my minnow prototype into a sellable lure. Two trips and two successes have to count for something.

Over the weekend my sister came up for a visit and agreed to feature in one of my adverts as long I made her unrecognisable.