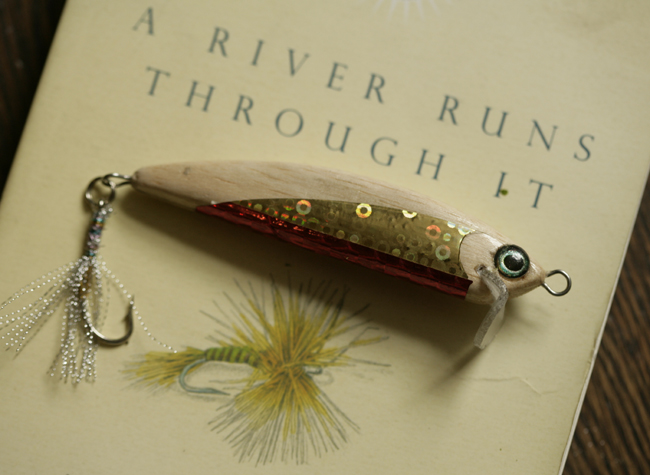 Image Above: The Montnana John Wiggler

A couple of weeks ago a fellow angler who fishes in Montana called John sent me an e-mail offering his own thoughts on fishing lures and pike and suggested I make a wobbler and lose the central treble and replace the rear with a single hook. I have had to learn to take advice it is not ability that comes naturally I prefer to make my own mistakes before seeing sense. So after initially rejecting the idea for no good reason other than it was somebody else’s, I had a little time to think.

I have on balance caught considerably more fish on single hooks than on trebles, admittedly many have been with bait, flies or as feather rigs but when it comes to lure fishing I have fallen into that trap of believing more hooks can only be  good. There is a point when I suppose a lure could carry enough hooks to be considered as a storage device in its own right rather than a piece of tackle. What are all these hooks doing they cannot all be hooked into the fish. The initial idea for multi trebles is to insure that if a predator so much as looks at the lure the chances are it is going to feel some chemically sharpened metal. Once hooked the other trebles can become a headache either damaging the fish or hooking up with other debris when the fish runs for cover. I have a fear of landing nets or should I say a combination of landing nets, fish and treble hooks. On one occasion this cocktail led almost to full scale surgery removing one hook from the fish and other from the fish and the net: I have never used so many forceps and pliers and still come away with a whole in my net.

Still one lure one hook is a big step. I use a single treble on the Hybrid casting spoons and that works well especially for avoiding weed and as I often fish with my feet in water unhooking and returning pike can be as easy as giving a gentle shake in the right direction. There is always a chance I could miss a hook up but this is not just a problem with single hooks I have lost fish on three hook lures.
I sent an e-mail back to John to let him know I would have a go at making a single hook wobbler when I got the chance.

It wasn’t pretty as my prototypes seldom are, but it was through wired and I was pleased with the way I had concealed the weight. It ran a little shallow just what I needed to deal with the summer weed growth. But the action was great a tight wiggle rather than a wobble. As a mark of respect to that other Great Montanan, Norman McClean the author of ‘A River Runs Through It’, I dressed the single hook with a bit silver flash.

Once again I found my preparation a little lacking when I hooked my first pike on the ‘Montana John’ prototype, my camera was poised but unresponsive. Holding the rod up with one hand I opened the battery compartment with the other while simultaneously remembering that the battery was still on charge as it had been all night. I put the camera down and reached for the mobile phone which also has a camera but not the best quality.

I had been ten minutes at the lake and this was my first fish all one pound of a pikeling with a single hook firmly in the side of its jaw. John was right, unhooking the fish was simple it never even left the water. I put the prototype away vowing to give it a proper coat of paint but the pikes teeth had already punctured the balsa. I took six more pike over the next three hours on various homemade lures and made numerous poor quality images with my mobile phone and all the time planning to put the Montana John into some kind of production. 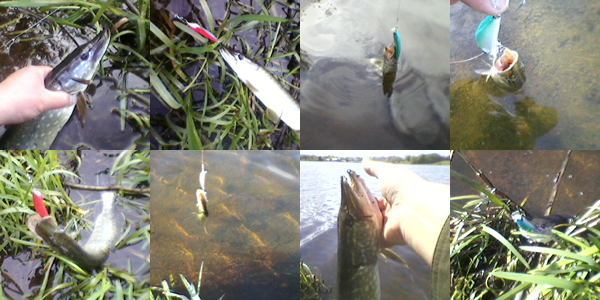