Being taught how to fish

I am not sure exactly which side of midnight it was when I finished editing and reviewing the video before leaving it to upload. The kids, or one of them woke me around five am and I was up to check if it had all worked out with the upload while I slept. An hour later I was stood on the street waiting for a lift to a lake out of town. I was showing a new fishing buddy one of the lakes I normally fish when there is enough petrol money in the kitty.

At the lake it was still enough for a little of the previous night’s, cool air to have hung on in the shadows while the sun poked at the mist. We made our way along wading in the shallows and throwing shiny things about until the water deepened. It was not too long before I got my first taste of action as a largish pike took one of my soft plastic grubs close in.It walked, danced and rolled and then cut my line above the trace. I wound in and inspected the clean cut braid remembering it was 50lb. 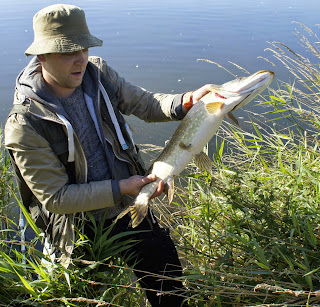 A few minutes later Rolandas took a jack twenty yards away. I moved up the lake and it wasn’t long before I heard some more splashes from his direction, twenty minutes later he was shouting and I ran back to find him with something a little larger. So I was being taught how to fish again and as a good student I raided his tackle box for another spinner to match his. It didn’t work and by lunch time we had finished and it was off for home. Three to nil, but what a morning by the water.