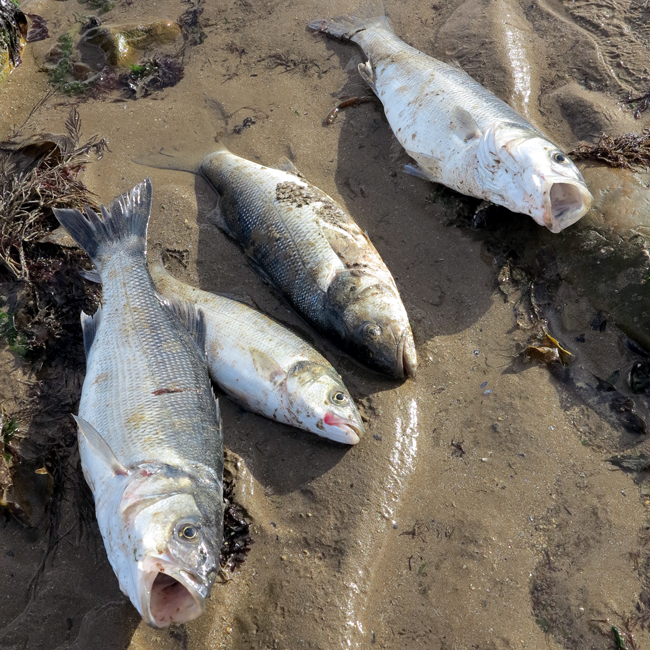 Image Above: Sea Bass Caught With a Gill Net on a Welsh Beach.

The net stretched out from its anchor point at the seaward end of the jetty into shallows at the bottom of the tide. I wondered if it was sea trout they were after or bass. The net’s owner was up to his waste in water lifting the line and floats as he moved towards the ball that marked the end of its reach.  When I brought my gaze down to the sand I found almost at my feet four sea bass lying stiffly in the weak sunlight. I took some photographs and moved on.

I don’t know whether gill netting sea bass is wrong. I know I ate fish and chips for lunch and the fish tasted like cod but I didn’t ask the question so I couldn't say where it came from or if it was as endangered as the few cod who now make it into British waters are.

Image Below: The Net 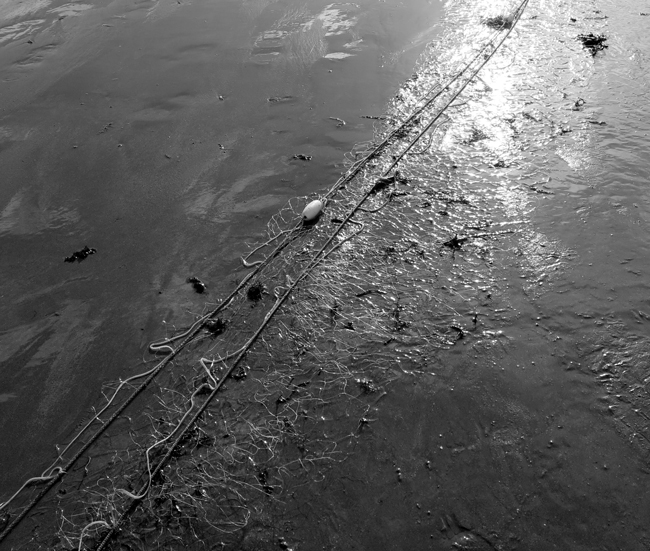 After spending a little too long messing with videos I needed to get out and get some fresh air. So this morning I headed off to the local pond while the weather was bad enough to deter less fool hardy anglers.  Building lures can be great but fishing with them is in a whole different league. I wasn't expecting much from the pond it had rained for the whole of the previous day which had raised the water level a little but surprising not coloured it much beyond its normal noodle soup hue.

There was one carp angler who was packing up his tent after what looked to have been a heavy night. I clipped on a Phox Minnow and sent it the short distance across the lake. With the summer weed almost gone the lure bounced off the bottom on fast retrieves only bringing home the occasional autumn leaf.  I worked along the reeds and covered both shores at the tail of the water. When the Carp man had gone I moved to a deeper stretch and took a jack almost on the first cast. The hook was looped around a gill raker but luckily it had not pierced any flesh and there was no blood. I slipped the hook out gently and the raker flopped back into position undamaged. Back in the water the pike bolted and I move along the bank a little.  Five or so minutes later I was in a again and then as I struggled to find my camera the fight came to an end as the pike broke the surface and threw the hook.  I took a few casts over the same spot hoping for a replay and surprising I hit into something a little larger once again I let the line fall slack as I pissed around with my camera and then the pike was gone.

I put the camera away and headed over to a small stand of reeds on the other side of the lake where I had often seen movement. This had all the looks of classic pike hold up,  a sunken tree trunk, reeds, shoals of juvenile fish and almost impossible to fish with a lure. I managed a few casts and something rumbled under the surface on the edge of the reeds. In the excitement I buried the lure into the submerge tree and after a harsh tug on the line there it stayed and will probably always stay. I tied on a new trace and clipped on my larger pine minnow casting it way out beyond the snags, it wobbled its way up to the reed bed and the rumble came out to meet it.  This was a much bigger fish and I kept the camera safe inside my jacket until I had it on the bank.

I need a go-pro or a cameraman

Jack Pike On A Phox Minnow

How to make a Balsa Lure Part 2