A Tale Of Two Lures

Image above: The first pike of the afternoon.

It is late afternoon when I finally make it to the lake. A trip to the tackle shop had delayed my departure. There is seldom a queue at the counter but the shop is home to a collection of anglers who should probably spend a little more time near the water be it soapy or the fishing kind. Today the owner was demonstrating his one and only super power the ability to resist adhesives. The impromptu display began while he was fixing one of his patrons fishing umbrellas with fast setting epoxy. After the epoxy failed to glue his fingers together he produced a tube of super glue and liberally dotted it on his fingertips before pressing them together. True to his word after a minute his fingers came apart with skin intact. I left as one of his other customers who had tried the same trick was realising his piano playing days were over.

The banks are almost unrecognisable a flush of summer growth has filled out the space between the lowest branches of the bankside trees and the tall waterside reeds. I find space and set up the rod and reel where the denser shade of the trees had stolen the light stunting the undergrowth.
The first cast puts my lure deep into the clutches of a weed bed it comes back embedded in a tightly packed ball of green. I cast again and again fanning out to cover the banks and to reach for the centre of the lake but my lure stalls every time as it picks up another beard of weed. I move and start again but it is a similar story. I try a shallow lure and then a surface lure but it makes no difference; with little in the way of open water every retrieve only brings more weed.

The lake is old flood land a product of subsidence and does not fall away to any depth much beyond eight feet. At this end the banks narrow slightly where two small rivers feed in cutting channels some distance over the lake floor. Ultimately the bed load of material carried by the moving water settles out gradually reducing the depth of water until weed begins to fully occupy the water column.

I return to the path and walk the short distance to where the lake begins to spread out to its widest point and the rivers lose their influence. The weed thins its hold on the surface only forming dense drifts in the shallows where a strip occupies just a rod length of water from the bank. I begin the search with a Hybrid Casting Spoon sending it out almost parallel to the bank and retrieving it at speed with a pulsing rod tip so the lure flickers and veers sharply from side to side. With each cast I aim at another mark on the clock until I work my way from ten o’clock through to almost half past two. It is hard to get to grips with the lakes submarine topography without a depth finder and a boat so I cast for coverage hoping to increase the odds of happening on features that hold pike. Often here I have drawn fish out of the middle of the lake casting at twelve o’clock. I run through the clock again varying the retrieve with long pauses to let the spoon drop into the depths.

I draw a blank and move thirty yards and begin again. With my lure out in the depths I catch site of some movement close into the bank on the edge of a reed bed. I retrieve the lure and stop to take a look and way things up, it could have just been a rat slipping into the water or moorhen leaving for the reeds but something nags at me. The reed bed is thirty yards off and skirts a small bay shaded by a scrub willow and stunted hawthorn. In the spring I had watched a small jack pike hang motionless in the shallow water until the clump of my boots had sent it off into deeper water.

Maybe it was just a jack chasing fry or frogs. I unhitch the casting spoon and reach for something a little lighter a new balsa wobbler as yet untried. It is not a radical design I took the basic shape from another of my balsa creations the ‘Montana John’ and rather than rely on a single hook I wired it for two small trebles, bulked out is profile and shifted the position of its internal weight to compensate. This is a completely hand carved lure and although newly finished with glass like coats of epoxy it has spent long enough in my hands for it to feel very familiar like the handle of a well-worn tool. I know it has the lightness of touch to cover the distance on the cast without thumping into the water and spooking whatever awaits it on the edge of the reeds.

I adjust the brake and magnets on my bait caster reel and swing the lure, it lands smoothly a foot or so from its target. As I crank the reel handle the lure springs into life and a wobble sets up before it sinks away into a dive. In less than three cranks of the handle the water irrupts and I am in, the rod is pulled sharply and begins to dance like a wand as a fish struggles with the idea of restraint. It is a short fight although the pike manages a brief but spectacular walk on its tail. I push my net through a gap in the reeds and the fish obliges.

Its body is thick and solid and even under a firm grip it writhes looking for leverage. The hook comes away cleanly and I am left for a moment to admire the fish and lure which is dwarfed as a David by a Goliath. I fumble the return to water which ends with me half launching the pike which recovers almost instantly disappearing to leave to small vortexes as a parting gesture. With the fish gone I gather my kit and head for firmer ground to eat crisps and drink pop and relive the moment.

From here on the bank space is limited by access and cramped by trees to cover the water between access points and would require long casts. Balsa even weighted is not the best material for punching out long casts; I clip on a heavier pine wobbler. Made with a denser Scots pine body larger in size as well as being heavier overall this is a lure to make up some distance. Despite its lack of delicacy the unusual weighting pattern and shear sides create  a violent wobble enough to draw pike in from some distance away even in coloured water.


Back at the water’s edge I find myself performing contortions to swing the lure out past the weed banks. I work around trees and push through reeds carrying my rod over head like a marine with a rifle. On one small section of open bank I send the lure out past the trees that enclose its other end. The lure runs a good way off from the roots and overhangs but a wave rides out on the back of a pike and I tense waiting for line to straighten under the load. There is no splash just a dull weight that occasionally thuds a little as I draw the fish in. It is smaller than the last one and the hook is deep within the mouth just ahead of its gills which accounts for its reluctance to fight it out. I reach my long nosed pliers inside and the hook comes away with a twist although the wound has trailed blood out through its gills. Once in the water the fish comes alive powering away to recover.

The air has stilled and evening is beginning to settle. Out on the lake the sails of dinghies sag as yachtsmen wait for a breeze to break up the huddle of stalled craft, out of boredom or looking for a competitive edge, some of the younger crews push hands through the water. Under the trees I have become a bait of sorts for the emerging mosquitoes and other insect looking for a feature to patronise.
I pack up slapping at the gaps in my armour and walk back to the car.

Before leaving I sort through my lures pulling out the familiar faces I have carved or cast and then placing them in some kind of order. It seems a long way from business end of selling lures. I wonder about what makes a lure something to be desired - is it its ability to bring home fish, reputation, brand, pro endorsement or just the look of it? I know that for the three to four hours I am out here at the lakeside everything else, work, business, life are wiped and there is only me the water and the fish. What I want from a lure is for it to feel like an extension of myself, sometimes I need range, or the ability fight through a gale, other times the light touch that responds to the crank of the reel handle and twitch of the rod tip like a puppet.

I suppose the business of selling lures is about being part of someone else’s time on the water and that is a big ask.

Image Above Right: A Second Pike
Image Below:  The Pine Wobbler and Link to Shop 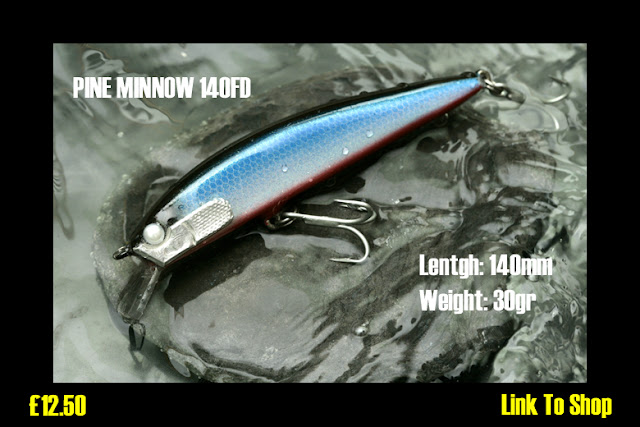