The sun was up but it had failed to reach the water’s edge. The surface of the lake was perfectly still even the ducks seemed to have hushed themselves into corners. Despite the hour I was not alone, a carp angler had two rods out and further down on the opposite bank another fisherman was waiting on a float.

I began casting my minnow enjoying the light fwap as it touched down. After months of neglect I had finally cleaned and greased my fishing reel which was behaving almost as well as it had done straight out the box.  With no wind to fight, a free running reel and a new lure I was looking for fish to complete the picture.

The lure behaved beautifully, the extra weight from the pine rather than balsa construction gave it a little more direction and purpose on the cast. Having opted for a less than stable cylinder shape in the design the lure had a much more pronounced wobble. I covered the short section of bank available to me quite quickly with little if any response apart from snagging a range of old carp rigs.
As the sun began to dapple the lakes margins I headed over to the island to cast around the overhanging branches and shrubs. With the glare in my eyes and hemmed by the greenery I lost it for a bit and began firing off casts in random directions. When I finally settled down I managed to send the lure out parallel to the shore and in a few short turns of the handle I was into a small pike. It sailed in to the shallows breaking the surface monetarily before ploughing on  towards my feet.

My unhooking mat was already open thanks to its amazing ability to fall from my rucksack at any opportunity. With a little minor encouragement the pike unhooked itself and I quickly took some photographs before returning it to the water.

So this was to be the start of another day's work, I spent the rest of the day airbrushing lures and putting together the opening page of my new website.

Image Below: New photo for opening page of website 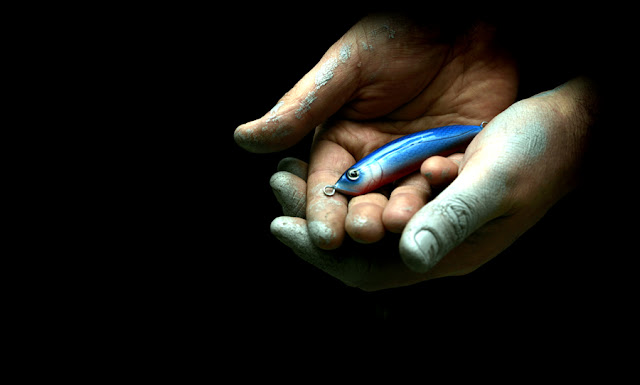 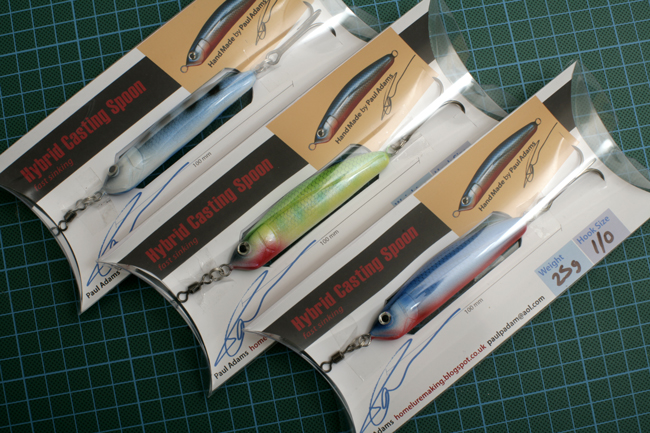 It still seems like there is so much to do.  I spent the day on the train travelling to Yorkshire and back which gave me a chance to sit down with a pen and paper and work on some lure ideas before they go out of my head.I have just finished the package design for the casting spoons and I put some together this evening to send off.  So a deep breath, before the next challenges a website and proper online shop.

p.s. I ran the bath and gave my new lure (prev. Post) a small test, it is looking good but I think it will be Friday before a pike gets to have a go at it.

The Devil Rides Out 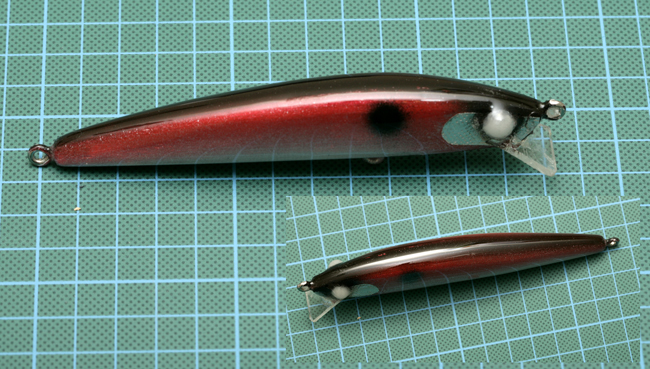 I wanted to create a robust minnow type lure from wood using just some basic geometry to give it that look rather than complex carving or casting.  I shaped the above lure from pine using the band saw and router. As test piece I thought I would go a little off beat with the colour, this I suppose is the zombie look. The eyes are glow in the dark beads cut in half, maybe not zombie more the devil rides out.  This time I am going to let the epoxy fully cure before giving it a test run.
Posted by Paul Adams at 13:24 2 comments: