A long cast into the soup 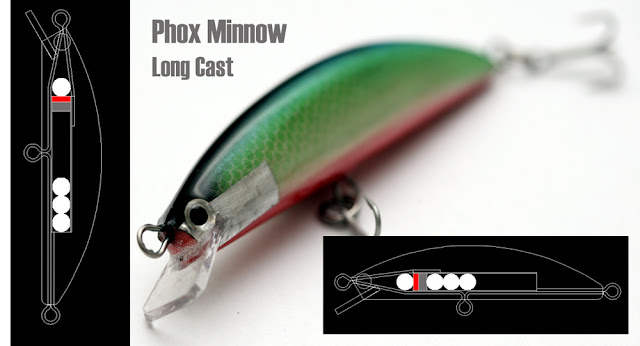 I knew I should I have stayed at home before I set off. It had been raining hard for almost a day and a half before the weather broke and a weak sun managed to hollow a disc in the clouds. The lake water had turned the colour of strong milky tea, the kind of tea you would accept only in politeness while looking for a plant pot to tip it in. Normally when the lake colours some visibility remains even if it is reduced to a few feet but today I could have been dropping my lures into molten lead.

I had come to test a new lure which in fairness is not the same thing as fishing although catching a fish while not pursuing them is always a bonus. The lure was a Phox Minnow with a new magnetic weight shifting system. I wasn’t looking for distance particularly but to reduce or even eliminate the tumbling that normally plagues lightweight lures on the cast.

I don’t have a great record with prototype lures I have a tendency to test them to their limits and then a little beyond so there is always a little trepidation when tying on a new crash test dummy. Rigged and ready I found a nice open area of bank and swung the rod, there was a sharp click as the internal weights shifted and then the lure sailed out over the lake. There was no tumbled or spin just a long arcing flight with the line pealing out like a vapour trail, I half expected a thud and then the rumble of a distant explosion as the lure touched down.

I eventually left the lake and made the short walk up the embankment to the canal. By comparison the water looked almost pristine but in reality visibility was only a little over eighteen inches. There was another problem to contend with; the wind had stripped the last of the autumn leaves from the bankside trees and they hung in the slow moving water suspend like mines. I wasted too long collecting flora.

Later I clipped on a spinner bait in the hopes of avoiding the leaves and maybe luring out a pike by vibration rather than sight. Instead I moved from flora to collecting the kind things that canals are more famous for holding. A brief but not exhaustive list of my haul follows: A complete open golf umbrella, a hood from a jacket, a pair of trousers, part of a pair of jeans, an Asda plastic bag, a Tesco plastic bag, a cloth draw string P.E. bag (haven’t seen one for years), part of a rod case, a long piece of what looked like video tape. Eventually a pike made a feeble strike as the spinner passed  but it missed and rolled at the surface before returning into the murk.

Shifting a bit of weight 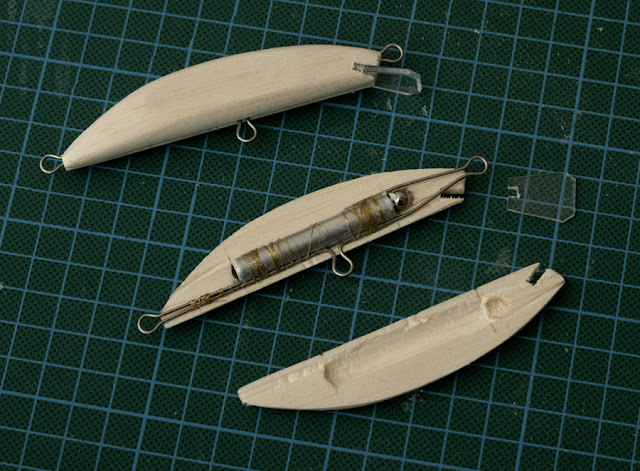 Some bits and bobs of pipe finally turned up with this afternoon’s post and I got to mess around trying to put together a weight shifting tube for the Phox Minnow. Like most lightweight balsa lures the Phox suffers from a bit of tumble on the cast, so I decided a while ago to design a magnetic weight shift. At the first opportunity after dinner I quickly bent up a new wire configuration to incorporate the tube and then carved out a balsa body. Externally the lure will look exactly the same it is only internally that things have changed. There are four balls, one external to the tube then a magnet, plastic spacer and another three balls which will hopefully pull away from the magnet with the force of the cast and then roll back when the lure dives to be held in place until the next cast.

This is all untried as far as this lure goes but fingers crossed I should get to try it out in water  in a couple of days.
Posted by Paul Adams at 12:36 No comments: 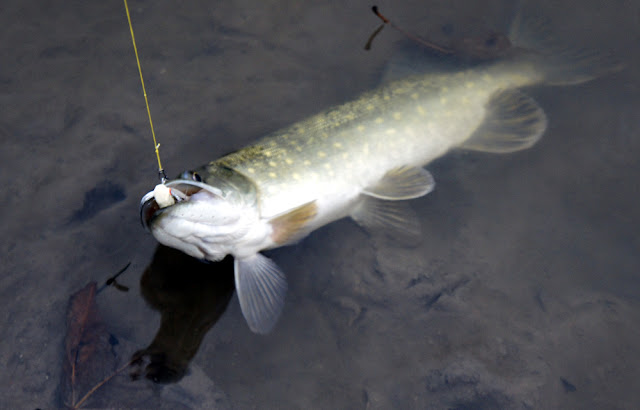 Image Above: Pike on a homemade jig head
Image Below Right: Polyurethane jig heads and spinner bait (note the missing point on the last jig)
Image Bottom: Bungee sacrificed in the pursuit of pike

Blanking once is bad enough but to blank twice in a row is a bit of a confidence breaker and when it’s your own lures on the end of the line, well it doesn’t get any worse. I have a list of familiar doubts for these occasions but with pike I take comfort in the fact that I have only been fishing for this species since February this year a little less than tenth months. My previous pike experience was a couple of fishing trips to a gravel pit about five years ago; even then I was fishing with homemade lures and enjoyed some success.  I still have a lot to learn and winter is proving to be a harder master than I anticipated.
I suppose things have slowed down and I have still been fishing as if the sun was still cracking the flags. Pike like most fish get a bit lethargic in the cold and without that extra kick of solar energy heating things up chasing down every plug that rattles past them can not only be costly but just plain impossible.  Most of my lures require some speed to create action or in the case of floating/diving lures to dive down to the fish. Slowing things down requires something else; a lure that has action, depth and moves slowly enough to annoy the pike for a little longer. Looking for a bit of inspiration I turned to the late Charlie Bettell’s book entitled, ‘The Art of Lure Fishing’. Amongst the anecdotes and fisherman’s tales he gives some sound advice on using lures that run a little slower and deeper like spoons trailed behind weights, spinner baits and jig heads (my current favourite). 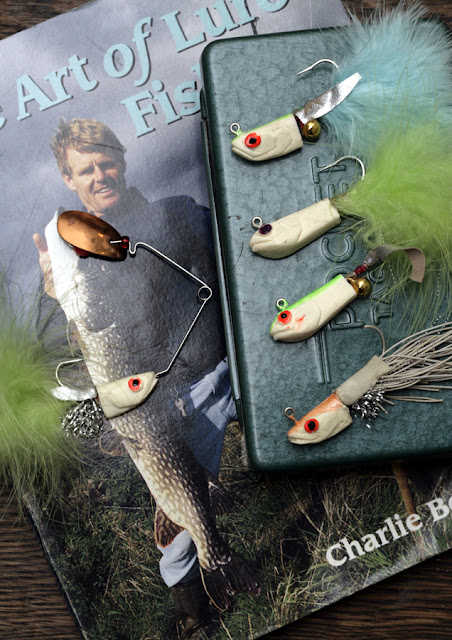 So last night I got the polyurethane resin out again and cast half a dozen jig heads from some recent moulds I had made. Taking Mr Bettell’s advice I knocked up my first spinner bait with a blade cut from a scrap copper fire surround. To dress the jigs I got the feathers and flash out, added some brass jingle bells (nearly Christmas) before butchering a bungee elastic to make rubber skirts. Finishing touches came by way of my sister who is helping to sort out a friend’s fashion design studio by getting rid of off-cuts. I managed to retrieve to pieces of stretchy fabric one with a glow in the dark coating and another with fine silver scales, these had come from an outfit she made for a guest on ‘Top Of The Pops’ ; a television program I watched almost religiously until its demise.

It was a cold start at the lake but the spinner bait was a revelation the blade turned even on the slowest of retrieves and as it pulsed the feathered tail gave a mesmeric wiggle. Following Mr Bettell’s instruction I bounced it off the bottom and as if by magic its design kept it almost snag free. I worked the lake but nothing was in the mood and not having  brought my wellingtons I didn't fancy dampening my feet to get over to the island and the sunlit shallows to see if anything had come to warm up. I went through all my jig heads giving each a try and retrieving them in slow bounces until I had an almost mental picture of the bottom of the lake. Finally I pulled out my bungee corded friend and sent it across the lake. Within a few casts I had hooked a jack and despite the cold it set off at a pace for a patch of shallow water a little further down the lake.  I was just about to jump into the shallows when I remembered my lack of boots and quickly walked the fish to a place I where the bank was low enough for me to unhook it while it was still in the water.  As if to pour scorn on my lethargic pike theory it bolted like a torpedo. 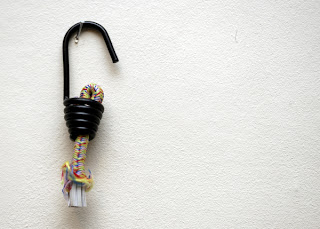 I moved further up the lake and within five minutes was into something a little larger that set my drag ticking like a bomb. On my knees at the bank I reached down to turn the hook again and release the fish without lifting her but the barb wasn't going to come back through so  I got the snips out closed my eyes and let the point and barb ping over my head. I felt a momentary pang of disappointment realising that was the end of my jig but feeling the pike surge out from my gentle tail pulls more than made up for it.