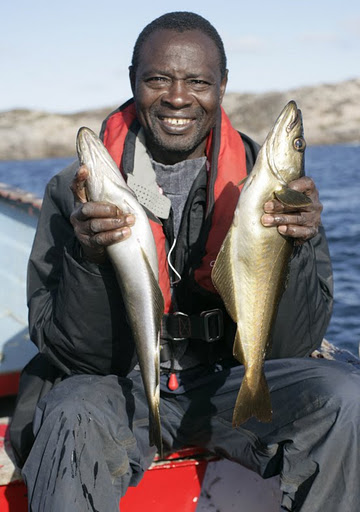 Image Above: Wechiga holding a couple of pollock
Location: Isle of Erraid, Sound of Iona, Scotland

We have had two days of good weather, two days out of month of truly atrocious gales and swell far outside of the capabilities of our boat. So yesterday I was out at first light, 7am with Orlando for a bit of mackerel bashing in the sound of Iona. After an hour we had bagged twenty by trolling along the channels that pass into the sound from the rear of the island. 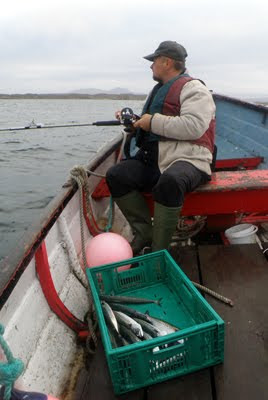 This afternoon it was the turn of my father and another visitor to the island, Wechiga from Ghana who is staying at the croft. I explained it was probably the worst time to go fishing at the bottom of a spring tide but we might be lucky. So after finding out who wanted which rod we set off into the sound trolling some homemade feather rigs. The afternoon sun and relatively small swell meant the bottom was visible far out into the sound and it seemed there was nothing hiding in plain sight.

We motored round to the back of American island and Wechiga hooked two good sized pollock on the move, I disgorged them and he quickly dropped his line and brought up another of a similar size. My father hooked a couple of mackerel but little else showed up as moved around hell’s kitchen. Unused to fishing over rougher ground the weed and rocks claimed their fair share of weights and rigs, luckily being mostly homemade we lost in the region of 50pences worth of tackle. We moved again and took a dozen average sized coal fish and some more mackerel before heading home and inviting Wechiga for dinner the tomorrow night.

Image Below: Fishing weights made from copper tube filled with lead 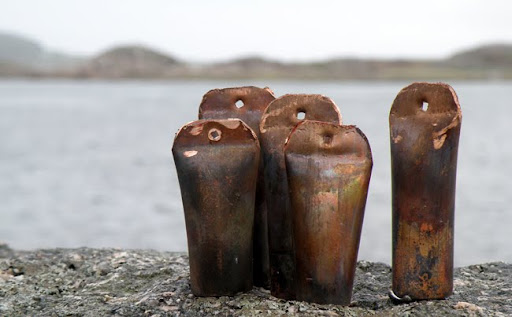