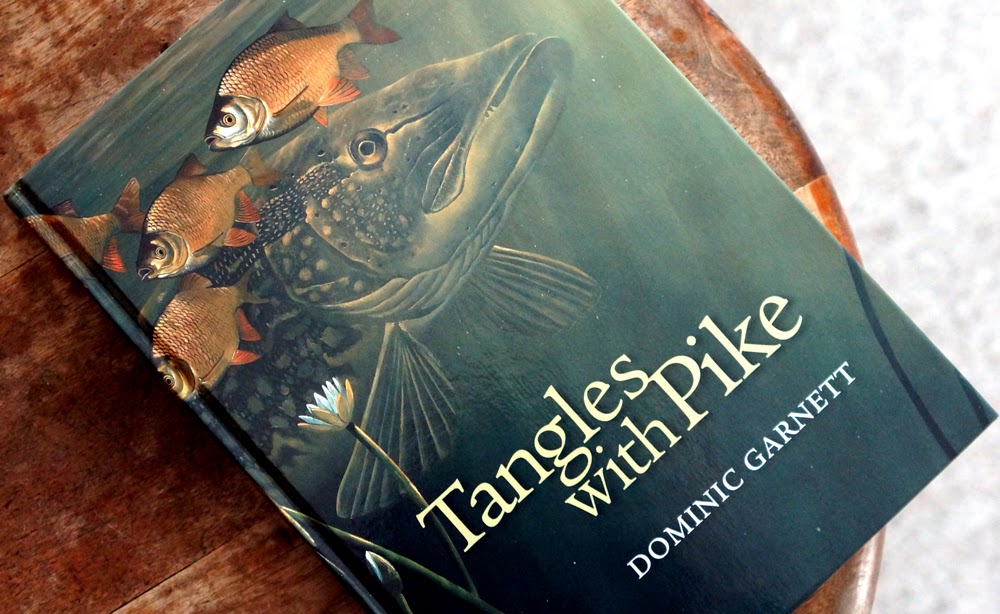 It has been a long time since I have sat down and read a book, and longer still since that book was about fishing.  There are a few solid reasons for this; the first is the internet which is not strictly reading in the traditional sense but it is a very useful source of fishing related stuff and dancing cats. The other reason being I really have not had much luck with fishing books. With some angling authors I have wondered if they would have been better not writing about fishing altogether, but concentrated on their favorite topics; the immense size of their testicles and how brilliant they are.

As it was my birthday I felt the need to buy myself a present that would of been difficult to get hold of using the unreliable method of dropping hints to loved ones. Luckily Dominic Garnett’s new book entitled, “Tangles With Pike” is just off the presses and with a little forethought I ordered a signed first edition from his website which despite Britain’s postal service arrived on my birthday.

I am not one for penning book reviews as having to write reports about memorably dull books at school has scarred me for life and I feel if I was to write a review it would in some way be a victory for my english teacher who was shit.

Back to the book.  This is really a collection of short stories about Dominic’s own brand of pike fishing which he treats less like a religion and more like a pleasant drug habit. Along the way he gets to bump into some fellow addicts and the odd bit of fishing royalty all sandwiched neatly with a bit of travel.

That is the hard stuff out of the way, what I like about this book is that quality in the writing that transports. I can watch a video and it is great to see Robson Green shouting about losing some monster fish on some tropical jaunt, but it is not going take me there. By contrast reading a few lines from this book and I am away in Finland pulling perch from pristine water or sneaking along some stretch of semi urban canal to put a bit distance between myself and the town’s delinquents.

Should you buy this book? I don’t bloody know but I wonder if I had spent the £15 on a spool of braid would I have gotten the same pleasure, would I have travelled and would I have learnt anything worth knowing. Cheers Mr Garnett and keep dipping them quills in the ink and occasionally in some water attached to a hook and a worm.   Link to Dominic's Site

I also need to say thanks, to all those fellow lure makers who sent birthday wishes. I think apart from the Artic and Antarctic I got a happy birthday from somewhere on every continent and thanks to google translate one of them came out as “Happy cow feast”

I spent the best part of the day practicing filming with Jordan and Jordan to local lure nuts and youtubers (The Scouse Angler) on a stretch of canal close to the city centre. It was great to get away from videoing myself carving lures and see another side of filming. It gave me some great ideas for future films and projects. I also felt little old realizing I had left my glasses at home and also watching the pair of them flip lures round like Jedi’s with graphite sabers. I put together a little experimental intro to a video and hopefully I can get out soon with them again.